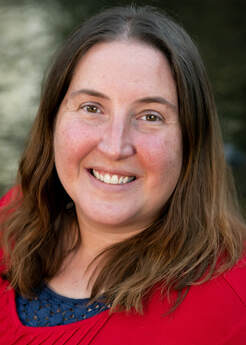 Amy Carman
Amy Carman received a Bootstraps scholarship in 1997 when she graduated from Evergreen High School. Her class was one of the last classes before Evergreen and Conifer officially split into two schools. She was very grateful for the scholarship she received because it allowed her to attend Colorado College and receive a Bachelor of Arts degree in European history and politics and a minor in Spanish. She later received her Master of Arts in public policy from the University of Denver.

Her transition from high school to the university setting was smooth, and she credits Evergreen High School for her education and for preparing her for college. She believes her coursework at Colorado College was valuable, and she enjoyed the block schedule, although some classes were a little challenging to master in only three and a half weeks. She lived in the dorms her entire time at CC and spent her third year at the University of Edinburgh, Scotland during a time that Amy says was “fascinating in the Scottish history of parliament.”

​Colorado College was an expensive school and the Bootstraps scholarship helped her pay the costly tuition. She also worked on-campus jobs, taught science to children, and waited tables to help offset the cost of college. For extracurricular activities, Amy participated in the debate team and joined Tae Kwon Do; she earned her black belt after college.

As an undergraduate, Amy dreamed of pursuing a career in law as a criminal prosecutor; however, her time spent as a legal interpreter before graduate school changed her career path and she received a master’s degree in public policy. During her graduate studies, Amy wanted to join the diplomatic corps. She took the test and passed all the interviews, but life had different plans for her. Amy was seven months pregnant when she defended her thesis and the diplomatic corps looked less attractive through the eyes of a soon-to-be new mom.

Boys and Girls Club of the High Rockies
Amy is currently the CEO of the Boys and Girls Club of the High Rockies. She oversees two clubs, one in Bailey and the other in Fairplay. The busy season for Amy begins now and includes providing summer activities for over 640 kids in Park County! During the pandemic, the Club was open and in-person even though the schools were closed. The Club offered services to children in Park County including the youth of essential workers who did not have the choice to work from home.

​The pandemic taught Amy to how to pivot, especially working for a non-profit organization. She needed to balance staying true to the organization’s mission and values with keeping the staff of 40 people employed. The rules were changing, staff members were getting sick, and she felt like she was flying by the seat of her pants as she navigated through unchartered territory. She quickly honed in on her conflict resolution skills as she dealt with people who had strong feelings and opinions. She had to learn how to find
common ​ground and make everyone happy while also keeping them safe.

In addition to Amy’s position with the Boys and Girls Club, she also volunteers her time and sits on the school board of Platte Canyon School District. She joined the board in November of 2019 and had no idea what was in store for her! Her volunteer position has taught her as much as her paid position.

Amy explained how organizations like Bootstraps pave the way so that students can attend schools they couldn’t ordinarily afford. She came from a family that was not wealthy. She received a lot of scholarships from Colorado College, but there were always gaps. “People don’t realize how significant the gaps are like buying books, filling up with gas, paying activity and sports fees, affording the food plan, and parking fees.” says Amy.

Amy believes Bootstraps has taught us how important community is with everyone from donors to private foundations pitching in to help. The financial support from the community enables students to attend college who couldn’t afford the cost, a fact Amy believes “is very significant.” ​Amy recalls one board member from Bootstraps who would meet with her every year, talk with her about school, ask her how everything was going, and give her the scholarship check. Amy still remembers that personal touch from over 20 years ago and appreciates the board member’s kindness and interest in her. It makes Amy happy that Bootstraps is still in existence funding scholarships and interest-free loans.
​
Amy is interested in seeing students from the Platte Canyon School District attend college and wants to help high school students attend trade schools as well. Amy has lived in Colorado for over 29 years and in Bailey for 18 of those years. She has three children who have been enrolled in the Platte Canyon School District since pre-school. ​