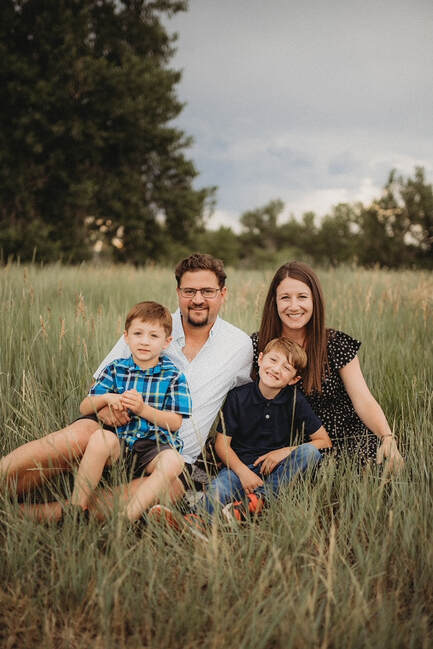 Audra Thornburg and family
Audra Thornburg (formerly Audra Bickel) received a Bootstraps scholarship in 2004, almost 18 years ago. “Crazy how time flies,” quips Audra. She graduated from Conifer High School, where she played tennis, worked on the yearbook, and participated in student government. In high school, she wanted to become a fashion marketer, and even though this is not the path she eventually followed, she attended Colorado State University and received a degree in Apparel and Merchandise with a minor in Business Administration.
​
Her transition from high school to college was smooth. She purposely chose a school that was far enough away from her parents to give her a little independence, but close enough that she could run home on the weekends when she needed some support or quiet time! She was lucky enough to get along with her roommate and loved all her classes.

Audra lived in the dorms during her first year of college and truly enjoyed the experience! She made a lot of new friends, some of whom she remains very close with today. She was also involved in a student-run fashion organization where multiple fashion shows were hosted on campus, promoting student designers.

While working an internship, Audra landed her first job out of college at a marketing company in Lakewood. Her position as Production Manager involved managing the design, build, and delivery of point-of-sale materials to retailers around the United States, and she stayed with the company for eleven years.

Her career dreams have evolved over the last 18 years since leaving high school. She originally wanted to become the next CEO of Nordstrom and/or work in the fashion industry to some extent. She then found a love for purchasing and production within the marketing industry, and that led her down the path to project management. She is now in a position managing project managers within the cyber-security space (a far jog from the fashion industry!).  She loves working with other project managers to further their careers while managing and helping make processes more efficient in the workplace.

Audra currently works for the cyber-security company OPTIV. OPTIV is headquartered in Denver, and she has worked there for the past three years. During that time, Audra has earned her Project Management Professional Certification (PMP) as well as her Scrum Certification. She was recently promoted to PMO Manager, which has been a fun and challenging new role for her, but one that she loves and grows from every day!

Audra’s ideal job would be exactly what she is doing now; however, she also hopes to publish a psychological thriller someday which is currently a work in progress. She loves reading psychological thrillers so is attracted to that genre. She dreams about having nothing to do but write for weeks on end in some quiet cottage in the middle of nowhere, just her computer and her! This year, Audra attended the Rocky Mountain Literary Festival and found it to be very exciting and inspiring for a wannabe writer. She started writing her book earlier this year, but her busy life prevents her from working on it like she wants. At the festival, Audra listened intently as author Scott Graham shared how he forces himself to write 1500 words a day.

During the pandemic, Audra was able to work from home along with most of her coworkers. The challenges she and her husband faced during the pandemic were day care and schooling for their four- and six-year-old children, who had to attend online preschool and first grade. With help from their parents, they juggled playing “teacher” one day a week. She felt blessed because she had so much family assistance. Their kids are now six- and eight-years-old and attend Elk Creek Elementary.

​Audra is a member of a book club, one that she has been leading for about 10 years. The group meets monthly, and they participate in many fun "field trips" like going to the Stanley Hotel in Estes Park and attending high tea at the Brown Palace Hotel in Denver. She reads (or listens to via audiobook) about 50 books a year. She also recently took a creative writing class that has helped her with writing her book.

The Bootstraps scholarship Audra received helped her pay for a portion of her first semester at CSU, but it also gave her confidence and extra support to start college. She always knew that she would go to college, but the tuition expenses were very daunting and stressful. With help from Bootstraps, Audra went to college knowing that she had the support of her community, and it pushed her to do her best!