Alex Vaughan
Alex Vaughan received a scholarship from Bootstraps after she graduated from Conifer High School in 2004. The scholarship helped her attend Colorado State University as an undergraduate where she started studying music. She later changed her major to biology and received her Bachelor of Science with a concentration in Genetics degree in 2007. Alex then continued her education in graduate school at Midwestern University where she received a Master of Medical Sciences in Physician Assistant Studies degree.

Her transition from high school to university was challenging at first because of the change from small-town Conifer to Fort Collins. In high school, Alex was active in the marching band and played the flute. She continued playing flute as an extracurricular activity in college for a few years. Alex lived in the dorms her first year, made friends quickly, and absolutely loved the experience.

The Bootstraps’ scholarship helped Alex balance classes, work, and extracurricular activities. Without the support from Bootstraps, she would not have been able to make enough money to pay for everything in college. Her scholarship paid for tuition and living in the dorm.

Alex decided to pursue a career as a physician’s assistant because it fulfilled her interest in science and aligned with her life goals. She wanted a career that would allow her to make a good living in any city where she wanted to live and be flexible enough with working hours so she could focus on having and raising a family.

During the Physician Assistant program, her clinical rotations exposed her to many different specialties. One of her rotations was in San Diego where she learned about organ transplants. Alex was able to assist with surgeries and found this specialty to be so rewarding because she was able to witness patients who got their lives back after having organ transplants. She remembers one patient in need of a transplant who was close to dying. After the transplant, Alex met the patient outside of the hospital setting and could not believe the patient’s transformation. She valued and appreciated how the patient’s life had been saved, and soon after, Alex decided to specialize in organ transplants. She began to work with liver disease patients in a 24-hour call center setting up transplants and coordinating surgeries for donors and recipients.

During her time in San Diego, Alex met her husband who is a marine veteran. After the birth of their first daughter, they moved to Parker, Colorado. Alex and her husband have two daughters, two and six years old. She no longer plays the flute, although her daughters would like her to play for them. After moving to Parker, Alex started working at the Veterans Administration Hospital taking care of veterans and their families. She has worked in hepatology, specializing in liver cancer, helping patients before and after liver transplants for the past six years. 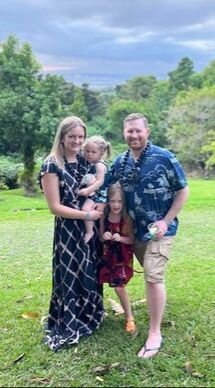 Alex and her family
Alex gave birth to her second daughter when the Covid pandemic was just starting. When she returned to work on the front lines, it was difficult for her because she was concerned about exposing her family to Covid. It was also difficult for her because she lost patients from Covid. The silver lining for Alex, however, was the positive support she, and others on the front lines, received from the community. Not only did she feel the outside support, but the team at the VA was amazing. Alex is so proud to be in health care because so many people adapted to the intense health emergency and stepped up in doing their jobs. The amazing people who work at the VA helped her navigate and manage the pandemic.

​The Bootstraps scholarship helped Alex succeed in her higher education endeavors. A lot of the pressure of paying for college was alleviated, and she is very grateful that she doesn’t have the financial burden of having to pay off student loans. Receiving the scholarship also allowed her to focus. Alex says, “When you are trying to figure out the rest of your life, I didn’t have to work extra hours to pay for it. Thank you so much to Bootstraps - you are doing a great thing.” Alex would also love to share her journey with any Bootstraps scholarship recipients who are interested in following a path to become a Physician’s Assistant. ​