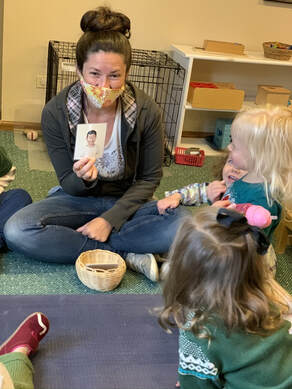 Cora Kemp with her toddlers
It's a small world after all!

Cora Kemp values community and relationship building. Cora received Bootstraps awards in 2005 after graduating from Conifer High School and, according to Cora, “…the loan has come full circle.” In addition to a scholarship, Cora received the Ponzio Family Bootstraps Loan to study education while also studying journalism. In 2011, she became an assistant teacher at the Montessori School of Evergreen where the Ponzio girls were students. Talk about a small world!

Cora’s transition to Metro State College was eye-opening because it was such a culturally and age diverse campus. When she was a freshman, the college was transitioning to on-campus student housing rather than just being a commuter school. Cora was one of the first freshmen offered student housing, which was initially off-campus. Cora moved to the on-campus dorm in her sophomore year once construction was completed.

Cora liked Metro - it was unique and often underrated because it’s a local state school.  Metro State College’s journalism department was very reputable thanks to the noteworthy professors who were working in the journalism field and teaching classes part-time.

As a college freshman, Cora was not into the party scene and her roommate was just the opposite. Cora wasn’t one to bend to peer pressure and sought a new living situation. She eventually roomed with the person who became her college best friend, who was quiet and had been homeschooled.

Cora's classroom bunny, Mazie
In her sophomore year, Cora joined the college newspaper, which increased her school pride and feeling of community through coverage of campus events. Being involved with the paper gave her a lot of hands-on experience and life-long friends. Eventually, she was assigned the role of the photography editor.

Cora was assigned to cover the Democratic National Convention in 2008, which she describes as “an amazing experience!” She had remarkable access to the event, which included leading a team of 35 photographers. She documented all aspects of the DNC from the marches, vendors, and individual stories. Cora had the honor of taking pictures of Michelle Obama during her speech at the Pepsi Center and documented Barrack Obama’s speech accepting the presidential nomination.  Cora also was interning for the Boulder Daily Camera that semester and continued to follow the presidential campaign through its entirety documenting presidential rallies of both political parties.
​
She graduated from Metro in 2009 at an inopportune time for trying to break into the newspaper business. The Rocky Mountain News was preparing to close its doors, and a lot of experienced journalists were now out of work and leaving the state. The newspapers didn’t want an entry-level person and Cora didn’t want to leave the state or receive low pay. To earn a living, Cora began her photography business. One of the main lessons Cora took away from Metro was the importance of and passion for illuminating the human condition through photography. But rather than go from story to story, Cora wanted a relationship with the subjects of the events she documented, and she accomplished that through her business, forming lasting relationships with couples and families she photographed.

After a couple of years, Cora’s mom became concerned about her living paycheck to paycheck, so in the spring of 2011, Cora took a job at the Montessori School of Evergreen covering for a teacher on maternity leave. She became an upper elementary assistant in the fall of 2011.

Cora gravitates towards the Montessori education, the philosophy of Maria Montessori, and values the relational aspect of the school. After eight years she received her Montessori Infant-Toddler Certification and leads a toddler classroom.  “This is my dream job,” Cora says. Cora still has her photography business; however, when she took on the role of a lead teacher in 2018, photography had to take a back burner.

The COVID pandemic affected her school, especially in-person teaching. She had to pivot from hands-on education to a virtual setting in just one week. The school shut down for an in-person instruction from March to May of 2020. Cora did her best to support the parents and had a zoom meeting with her toddlers for 30 minutes a day. She focused on the parent education piece and helped them enrich their toddlers’ education.   When the school reopened in August of 2020, they kept age-level cohorts rather than classes of blended ages. By keeping things small, the school was successful, although it was a hard year with a lot of anxiety.
​
Cora found the Bootstraps process to be amazing. The level of competition for other scholarships was daunting. She believes that Bootstraps scholarships and loans bring the community together because the donors care about more than just giving money. When she graduated college, she wasn’t forced to pay back the loan immediately and the no-interest part was a huge plus. She had no income as she was forming a small business and couldn’t make large loan payments. “It was amazing to not have to pay it back with interest.” This allowed her to grow her business without huge loan payments.

“We have an amazingly supportive community, and we are all interconnected.  I am more appreciative of the community support than the actual money that I received,” Cora states. Cora donates to Bootstraps and believes that although her gift is small, she truly makes a difference.

Her big advice to future college students - “Go and get an education and lead an amazing life. Choose your own route. No stipulations.” Cora liked that she was able to choose the college of her own choice and that students can select either university or trade schools. What makes her happy is to have a positive influence in her relationships with others.  Her goal in life is to leave a lasting impression on those she encounters daily by the interactions and relationships she forms.
​