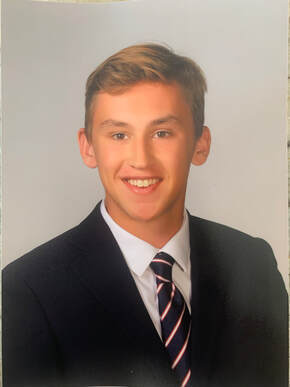 Casey’s transition from high school to college was initially a little difficult, but after the first couple of months, he established a good network of friends. Casey also found lots of things to do, like attending football games and enjoying the warm weather – he says he was outside basically 24/7 his first semester. He has not spent quite as much time outside during the winter months, but that is changing with the weather. There are 40,000 students attending University of Alabama, so there are always various activities happening around campus.

As a first-year student, Casey is currently living in a suite-style dorm. His roommate has a completely different schedule than he does, so Casey has a room to himself most times. He plans to live off campus next year and had to make those plans in October 2021 because it can be difficult to find housing. The University of Alabama is located in Tuscaloosa, and everything in the town feeds off of the university and the athletics. The small downtown is filled with Crimson Tide memorabilia everywhere.

Casey is currently enrolled in a Management and Information Systems business class, Geology 101, English Composition 102, and Macroeconomics. He also takes a general education class called “Intro to Listening.” The three-credit-hour class meets once a week and students listen to music for one hour. The professor discusses music from Mozart to classic rock in the 90s. Other general education classes include lab science, history, humanities, and last semester he studied intro to the study of religion. Casey is excelling academically and received a 4.0 GPA his first semester. His second semester is also going well, and with a few less activities in the spring, he can stay focused.

Casey joined a fraternity, participates in intermural basketball, and spike ball – a beach and lawn game. He has met a lot of people through his activities, and he appreciates having so many opportunities to engage with the college community.

Covid-19 has not affected his education at the university. He did attend high school classes remotely and remembers it was impossible to stay focused on Zoom. All of his classes at the University of Alabama are in-person. He attends classes everyday and accepts that he is the only person keeping himself accountable.

Ideally, after Casey graduates from college, he would like to work at a large investment banking firm like Goldman Sachs for the experience and the affiliation with the name. After a few years, he envisions moving to a smaller firm of 10-20 people and focus on retirement planning. He is studying finance and economics as a double major. In some ways, he finds college harder than high school, but he knows it comes down to time management and recovering from big projects and tests. The biggest challenge is finding time to sit down and focus because there are so many distractions. Casey admits that he and his self-discipline can be his biggest obstacles.

All-in-all, Casey loves attending The University of Alabama, navigating going to an out-of-state college, meeting new people, being involved in campus life, and attending classes. He appreciates the support from Bootstraps that helped him attend the school of his dreams.