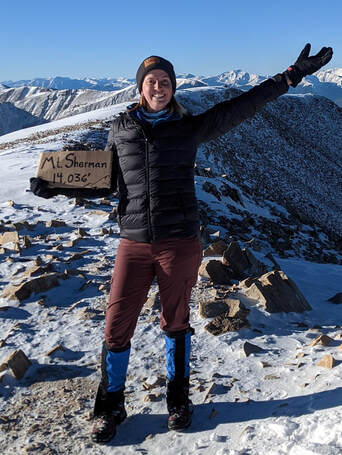 Jordan Fleming
Bootstraps scholarship recipient, Jordan Fleming, has a zest for life, the outdoors, and Colorado. As a native Coloradan, she loves to ski, hike, and raft. Jordan was born and raised in the Conifer community and graduated from Conifer High School in 2014. She currently lives in Loveland working for an environmental consulting firm.

Jordan received a Bootstraps scholarship when she graduated from Conifer High School and was able to use it for her freshman year. She attended Humboldt State University for her first two years of college and studied marine biology. The transition from high school to the university was smooth. Since she was already academically minded, studying and succeeding in college classes came easily. She thrived academically at Humboldt, but she missed the Colorado sunshine, her family and friends, and skiing. After two years, she transferred from Humboldt to Colorado State University in Fort Collins.

​Jordan lived in a dorm her freshman year and then in on-campus apartments her sophomore year. She joined the Archery Club and spent a lot of her time rock climbing. When she first graduated from high school, she thought that she wanted to pursue a career in marine biology focusing on research in tropical oceans. Humboldt has a great marine biology program, including a course in scientific scuba diving, and the school is located on the coast of Northern California.

When she transferred to CSU, she also lived in on-campus apartments for her junior and senior years. Since Jordan was no longer attending school on the coast, she had to change her major, and she chose general biology to study. At first, she was not sure what she would do with a biology degree, but she found an internship in Craig, Colorado studying wildlife near a coal mine making sure it was ecologically sound for the wildlife. It was through this internship that she started making connections in the energy sector.

Jordan’s current position focuses on compliance with governmental regulations for oil, gas, and construction companies. She maintains state regulations through vegetation monitoring, gas, water, and soil sampling, environmental clean-up, and she reports her findings to the state. While Jordan is happy in her job, her ideal job would be working in a governmental position in the environmental sector.

However, Jordan does not live to work. Instead, she lives for her passion for the outdoors, close friends, and family. Her work provides the financial stability she needs to do the things she loves. Fortunately, Jordan’s job was not affected by the pandemic, and she was able to either work in the field or from home.
​
Jordan is incredibly grateful for her Bootstraps scholarship. Every little bit helped her pay the high tuition costs and made her resources go further. She is appreciative of what Bootstraps awarded and happy to have had the opportunity.