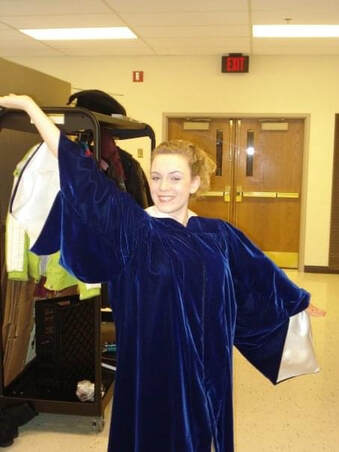 Kelly in the Concordia Choir blue robe, 2007
Kelly Nervick Bacon grew up in Conifer immersed in the arts and studying music. She received a Bootstraps loan after graduating from Conifer High School in 2004 and continued her education at Concordia College in Moorehead, Minnesota. She chose a degree in general music, with a certificate in music ministry.

Her transition from high school to university was wonderful, although it was a little scary considering she didn’t know anyone at Concordia. She was excited by the challenge and felt sure that she was where she was supposed to be. Overall, the transition from high school to college was easy for Kelly. Kelly did return home to Conifer during her freshman year, and one time, she took a bus all the way home.

She lived in the dorms for her first two years and met many amazing people. Her favorite friend lived down the hall from her and they have been best friends ever since. They lived together for three years, one year in the dorm and two years off-campus.

Kelly initially wanted to be an opera singer, but she decided to study general music instead. The last time she attended an opera was in college when a friend was in The Magic Flute chorus in 2008. She also participated in two operas in Grand Junction, CO. All her extra-curricular activities involved music, music, and more music. She was in choir all four years and had the privilege of being in the world-renowned Concordia Choir. It was a huge honor for Kelly to be a part of that choir, and it was one of the best experiences of her life. She was part of the campus ministry band, the campus ministry commission for one year, and she had a semester-long internship with a local church. She also worked in the Concordia admissions department as a student ambassador.

Her ideal job was to work in a church as a worship leader or music director, but it was difficult for her to find that type of job without having very much work experience. She met her future husband, Jaime, through a mutual friend who started a band in Grand Junction and introduced them. Kelly managed the band from Concordia until she graduated and moved to Grand Junction. Kelly and Jaime were engaged before her senior year of college. Kelly spent a couple of years interning at a church in Grand Junction and gaining valuable experience.

Kelly and Jaime were married for four months when they received an opportunity to move to Oregon and help lead worship at a church where they remained for nine years. They have three boys, ages 7, 9, and 11 months. Jaime works for the state of Oregon corrections system as a software developer in cyber security. Their home in southern Oregon is a twenty-minute drive to California and it reminds them of the high desert of Grand Junction. 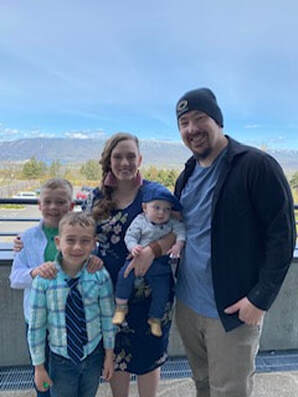 Kelly with her husband, Jaime, and their three boys
They departed from the church at the end of 2019, and like so many others, had no idea of the looming pandemic and its impact. Life was busy with three boys to raise, and Kelly found herself learning how to be both a preschool and first-grade teacher. She was glad to be home and focus on her children, but she missed the amazing teachers at the boys’ school, and it was challenging for the boys to miss the in-person education. She was incredibly happy when Oregon went back to in-person learning; their county returned to in-person learning earlier than other counties.

During Covid, Kelly was able to shift to remote work with a makeshift recording studio, and her priorities changed from leading music to raising three awesome young men. Working in a small town allowed her the flexibility to care for her children, help different churches with music, and build her Norwex consultant business that offers chemical-free products.

​The loan Kelly received from Bootstraps helped her succeed in college, and Kelly notes, “Education is tremendously expensive, and I went to an EXCEPTIONAL college.” She would not have been able to attend Concordia without financial help. Concordia College was the best experience in her life. Not only did she learn about music, but she also learned household and monetary management skills, experienced educational internships, and discovered rewarding interpersonal relationships; Concordia was full of life experiences! She left college with a degree that she loved and life skills. She is incredibly grateful for the financial assistance she received from Bootstraps because it led her to the education that shaped her life. ​