Don Mattivi and Rob Ellis
When Rob Ellis started high school in 1978, he was a young person with too much energy who got into a little bit of mischief. He had always taken woodshop classes, which were part of the general curriculum back then. Rob’s mom was intrigued by the Building Trades (BT) program at Evergreen High School and pushed him to enroll in the program his junior year. "The program ended up being a life changer for me," Rob said recently.

The BT instructors, Don Mattivi and Gene Younger, took him under their wings and gave him some purpose in life. He enjoyed the program so much he questioned whether to continue on to college or become a carpenter and build houses. Don looked at Rob’s test scores and grades and encouraged him to pursue college. As well as being one of the BT instructors, Don was a Bootstraps board member. Don took an active interest in Rob and got to know him and his family. He convinced Rob that the construction management program at CSU was for him and sponsored him through the Bootstraps scholarship/loan process. Rob received his first Bootstraps interest-free loan in 1982 when he graduated from EHS.

In the BT program, local contractors were recruited to donate their time with the house building project and were assigned students in the program to help them. One of the contractors was Abel Manzanares, a local tile setter. "For two years I helped Abel install the tile in the project house," Rob says. Abel was so impressed with Rob, he hired him for work in the summer months. Rob and Abel developed a close relationship while working together. They would go fishing and Rob learned about Abel’s growing up on the reservation in Ignacio, Colorado. Abel was akin to an adopted grandfather who taught Rob how to be “on time” and to develop a good work ethic.
​
During high school, Rob wrestled and ran cross-country. Rob says,  "I was always able to get decent grades in school without trying too hard, but the BT program provided me with motivation to study hard and excel at school." 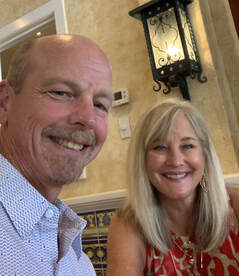 Rob and AJ Ellis
Rob’s transition from high school to college mostly was smooth. Rob was excited to move on from high school and lived in a dorm his first year. Back then there were no compatibility questionnaires and students were matched up randomly - Rob and his roommate were not a good fit! His roommate was the only person in the dorm with his own computer and he spent all hours of the day and night working and playing on it. Despite their issues, it was a good life lesson on how to get along and resolve conflicts.
​
At CSU, Rob studied construction management, a hybrid of construction, engineering, and business classes. The program provides a good general education to be successful in the construction business. The coursework helped him understand construction and engineering principles. It was also valuable to learn how to read financial statements and do basic accounting if you planned to run your own company someday.

At CSU Rob participated in intramural sports, work-study, an internship, and construction management clubs. He also refereed flag football, basketball, and softball which made him some extra money. Rob is proud to say he never needed to ask for money from his parents. He worked construction during the summer, winter, and spring break. With an interest-free loan from Bootstraps, he had to keep his grades above a 3.0 GPA and he paid back the loan on time with a discount (this was a bonus before Bootstraps and Evergreen Scholarships Association merged). He always felt an obligation to follow the payment schedule and, since the loan was interest-free, he saved a substantial sum of money.  ​
At CSU, the Construction Management lab allowed him and other students to get some hands-on experience in the industry. The lab taught students construction skills such as how to build walls and pour concrete. A teacher who was another role model encouraged for Rob encouraged him to apply for a work-study position assisting in the lab by setting everything up and cleaning up. It was valuable industry experience and provided some much-needed spending money.
​
Rob’s plan was to start a career in building construction. When he graduated from CSU in 1986 the country was in the midst of a recession with few jobs in construction available in Colorado. He was getting married in a couple of months and didn’t want to move out of state. Rob was offered a job in the underground utility construction industry for a company in Fort Collins and took it. He figured he could do that for a couple of years but 35 years later, he is still in the industry and now with his own company. He feels very fortunate for how things turned out.

The support from Bootstraps allowed him to independently fund his education without burdening his parents while the interest-free loan with incentives from Bootstraps saved him a lot of money. It is definitely a motivator to study hard and succeed when you are footing the bill. He has taken a lot of pride in this over his lifetime. Not being burdened with massive student loan debt allowed his wife and him to live a comfortable lifestyle and buy a house a couple of years after graduating from college. 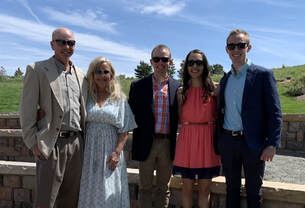 Rob and his family
Rob and his wife A.J. have been donating to Bootstraps for several years and for the last three years have funded an annual scholarship in their name. They try to attend the various fundraising events. It all started years ago when he saw an ad for the Bootstraps wine tasting event, attended, met Colleen, and wrote a check to Bootstraps. At the event, he ran into people that he hadn’t seen since high school or college. Rob and A.J. are happy to be able to give back.

As Rob reflects on the adult role models in his life, he thinks you never know what is going to be a positive or negative influence on you. Rob strongly believes the positive influences of Don, Gene, and Abel guided him on the right path and Bootstraps, along with his own hard work, helped with the resources to stay on it.