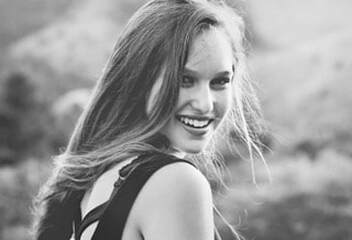 Sydney assumed that the hardest part of her transition from high school to college would be the social piece. Living in the dorms during her first year and getting involved in extracurricular activities allowed Sydney to meet a variety of students. She was surprised by the academic rigor of Georgetown University, and the accelerated level of reading and writing for her coursework was a big adjustment. She was also surprised when some students in her classes were quoting philosophers! Although the adjustment took some time, one year later Sydney feels a lot more comfortable with the academic side of college.

Initially Sydney was interested in international and political economics because she has an inquisitive mind for politics and travel.  Her career dreams include travel as she loves learning about other cultures and places. She wants to broaden her scope since she did not travel much as a youth.

At Georgetown University, a major is not declared in freshman year. There are four different schools:  Arts and Science, Global Affairs, Nursing, and Business.  A special Bachelor of Science was recently offered in Business and Global Affairs. Now in her sophomore year, Sydney applied and was selected for the prestigious new program. The exciting part of the program is that forty students are sent on three different trips together in their junior and senior years. This includes a multi-week trip around the world focusing on a specific business and studying their supply chain. Sydney is considering a career in the finance world focusing on equity research and wealth management.
Fortunately for Sydney, her first semester at Georgetown was in-person. Now due to COVID 19, all classes are remote. With a minor in economics, most of her classes this semester are lecture classes, so the on-line classes work.  Sydney feels the on-line classes are not as engaging as in-person without the face-to-face interaction with your classmates. Having a discussion on-line is tough, and Sydney finds it hard to focus on the computer all day. This has also limited her involvement in clubs or classes, and she misses simple breaks like walking to class.

Sydney also views COVID in a positive light, which has helped her refocus her priority on what she wants to major in. She is involved in projects which make her feel like she is making a difference. For example, student government helped her establish a role of advocating for financial aid on a socio-economic level.  Since Spanish is part of her course work, she is doing research for The Center for Latin American Studies. Sydney relishes her ability to understand the documents in Spanish. The Center has a contract mapping the response to COVID in Latin America and the Caribbean. She is monitoring Dutch territories and analyzing trends in these European territories and how they respond to COVID.
​
Sydney feels lucky to be at Georgetown. She has access to so many resources and experiences. She is thankful to Bootstraps to be able to have this great experience and hopes to return the honor to a future student.