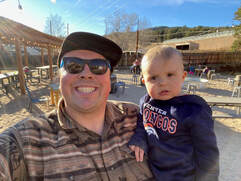 TJ Zeylmaker and son
TJ Zeylmaker remembers receiving a scholarship and loan from Bootstraps in 2006. He would soon be a Conifer High School graduate and remembers the pride he felt. “Education is a doorway to opportunity. I never thought much of myself as a Bootstraps applicant, so it was a pretty proud moment when I found out I was awarded the scholarship. For me, it was an avenue for independence and a foundation for starting my family.”

During high school, he played rugby and football for Conifer, loved to ski, and even worked part-time at the school. To TJ, “Every person I met in Conifer was uniquely different reflecting the mountain culture.” After graduating from high school, TJ attended the University of Northern Colorado in Greeley where he received a degree in communications. TJ continues to be grateful for the opportunity he was given to attend college and experience college life. He is also appreciative that the scholarship and interest-free loan he received from Bootstraps helped him pay his tuition bills each semester.

The transition from Conifer to Greeley was a significant change for TJ. “I had to love it because I couldn’t leave it!” Doggedly, he became involved with a variety of clubs, immersed himself in school, and engaged in campus life. He enjoyed forming relationships with people and made life-long friends in college. He lived in a dorm his freshman year with his best friend from Evergreen, and they had a “grand ole time.” He sometimes felt that his freshman year was an extension of high school, but he believes living in the dorm was an integral part of college life.

TJ’s career path has become clear just in the last couple of years. When he entered the workforce in 2011, jobs were not plentiful for college grads. He never doubted the importance of getting his degree, and he worked in many different jobs in his pursuit of a career. After college, he worked in construction until he and a friend decided to relocate to Argentina and pursue club rugby. They lived in Buenos Aires and cut their teeth on sports, culture, learning the language, and living in a giant city. TJ enjoyed living a different lifestyle outside of Colorado, but after some time, he realized that he wanted to be back in Colorado and live in the Denver area.
​
His first job back in Denver was for a clothing company, specializing in winter ski jackets for women and children. He worked his way into sales, accounting, and customer service, and then he started working in the office and found the ski industry to be satisfying. This job taught him how to work in an office environment and gave him the discipline to work a 9 to 5 job.

Currently, TJ is a manufacturer representative in the marketing department for 10 Point Sales and Marketing, a water and sewer utility company.  Initially, TJ didn’t have a direct vision of what he wanted to be or do in life. With the foundation he created through attending college, learning from inspiring professors, traveling, and life experience, he discovered his career path. He likes working in an industry that is essential for all – water and sewer.  That being said though, TJ’s dream job is to work as an accountant for Elon Musk, which would naturally include a free Tesla and a trip to space. Another dream is to establish a micro-brewery with friends in Conifer.

TJ started his marketing job right before the pandemic. As soon as the pandemic hit, TJ, along with everyone else in his company, worked remotely. The remote work forced him to learn his job without the help of co-workers, and it taught him how to rise to the challenge of work-life balance. Working from home allows him the flexibility to spend time with his wife and 15-month-old son. TJ also volunteers his time coaching both football and rugby for Conifer High School, so he remains busy and engaged with his community.
​
Bootstraps not only provided funding for TJ’s college, but, in a small way, it helped him become who he is today. TJ explains, “Bootstraps not only helped allow me to further my secondary education but taught me the importance of responsibility. I learned that the loan just doesn’t disappear. I need to be responsible and grateful for what Bootstraps helped me accomplish. It was a reminder of adulthood. Time to grow up and to become a better person.”